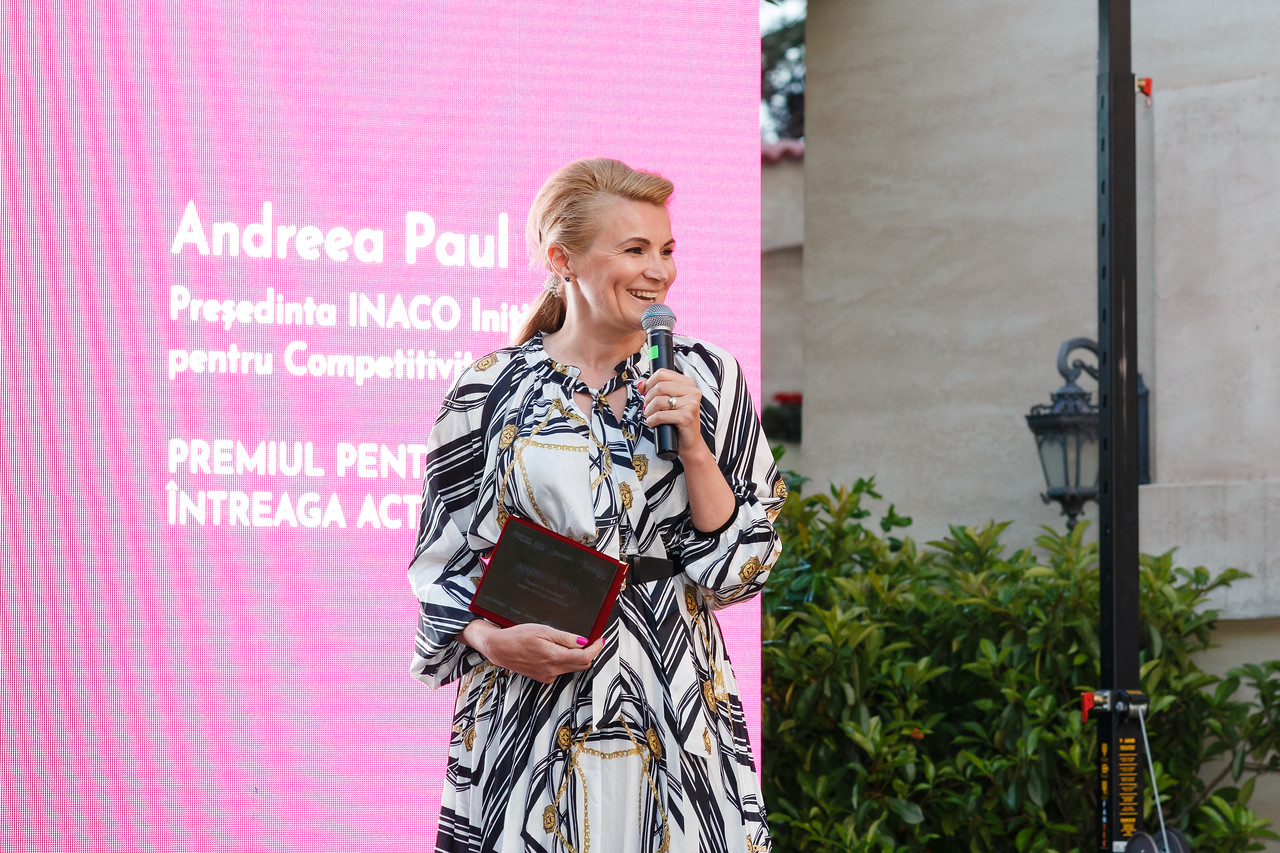 Andreea Paul is the founder and president of INACO, a think tank with over 60 specialists whose main concern is to stimulate and promote competitiveness in various fields, especially in education. In over 5 years of activity, Andreea Paul coordinated the launch of four editions of the Future Professions Guide, a very useful tool for students, teachers, parents, employers and entrepreneurs, and opened 16 innovative educational centers in the public and private education network, called SmartLab. She is the author of a unique triptych in the world that addresses women’s leadership – Women’s Political Power, Women’s Economic Power and Women’s Civic Power.

The prize was handed over by Livia Dilă, a journalist involved in educational projects, among which Eu and LUMEA.ro is a non-formal learning platform dedicated to students.

The manifesto of a responsible parent and educator

Andreea believes in a competitive, inventive, ethical and educated Romania. His dearest projects carried out by INACO are those dedicated to education – the Future Jobs Guide – now in preparations for its fifth edition – and Smart Lab – which brings to Romanian schools the first intelligent digital laboratories to which all students of the beneficiary schools and high schools have free access. It is the most advanced project in Romania to digitize 4.0 primary and high school education.

Andrea’s dream is for all 6200 educational institutions in Romania to have such a SmartLab.

Because all pupils and students have the right to have access to digital education, which teaches them how to use the latest generation equipment and how to approach subjects from the school curriculum, with the help of smart digital technology. It is the manifesto of a responsible parent and educator who is witnessing this massive exodus of talent and wants to find solutions to keep young people in the country.

INACO’s Founder is a Ph.D. in economics and university lecturer at the Faculty of International Economic Relations of the Academy of Economic Studies in Bucharest. A solid academic experience was also built as a researcher, for 8 years, at the Institute of National Economy of the Romanian Academy. After three years as an advisor to the Presidential Administration, three years at the European Parliament, another three years as an advisor on economic issues for two prime ministers in the Romanian Government and four years as a deputy in the Romanian Parliament – she founded the Association INACO Initiative for Competitiveness, a non-profit organization of managers, consultants, analysts, experts in the economic, educational field, connected to the network of specialists in the state and private economy in Romania.

She is a huge source of energy and despite the fact that she excels in many fields – as a teacher, doctor in economics, and president of an association that promotes innovation, as a manager, trainer, key opinion leader and, more recently, public speaker, she says that above all these public positions she adores the role of mother. Her 12-year-old daughter is the engine and inspiration for all the solutions for education.

As a parent, Andreea Paul no longer complains about the shortcomings of the state system, but seeks to find solutions where everyone blames the country, the government, the ministry or any other institution.

The unique trilogy she launched is dedicated to women’s involvement and empowerment – “Women’s Political Power”, “Women’s Economic Power” and “Women’s Civic Power”, published in 2011, 2016, and 2018, at the Polirom Publishing House. Andreea was inspired by the “moving Romanian realities that transformed evil into good and difficult into easy through civic involvement” and managed to collect the stories of no less than 100 co-authors.

The book focuses on an awakened female consciousness that never blames fate, poverty or government, but seeks to generate change by starting from within and gradually building a better world.

Each story of the 100 women is an example of success achieved through sustained efforts and a strong desire to achieve something for themselves, their dear ones, and the community. These ladies are active in various fields and support the most diverse projects, but the testimonies are lying on the same values of courage, passion, generosity, love, power, compassion, authenticity.”

In her project to support women, Andreea is looking for protagonists for future volumes to tell about the scientific and cultural power of women, who by their very nature take care of all humanity. Because when you educate and support a woman, you don’t just support one person, you support the entire family and community that develops around a woman.

Facebook
WhatsApp
Email
Twitter
LinkedIn
PrevPreviousAnca Dragu: „ Feminism is about normality, not about women who are better than men”
NextGloria Steinem and her world-changing vision, as if women matteredNext