Anca Dragu: „ Feminism is about normality, not about women who are better than men” 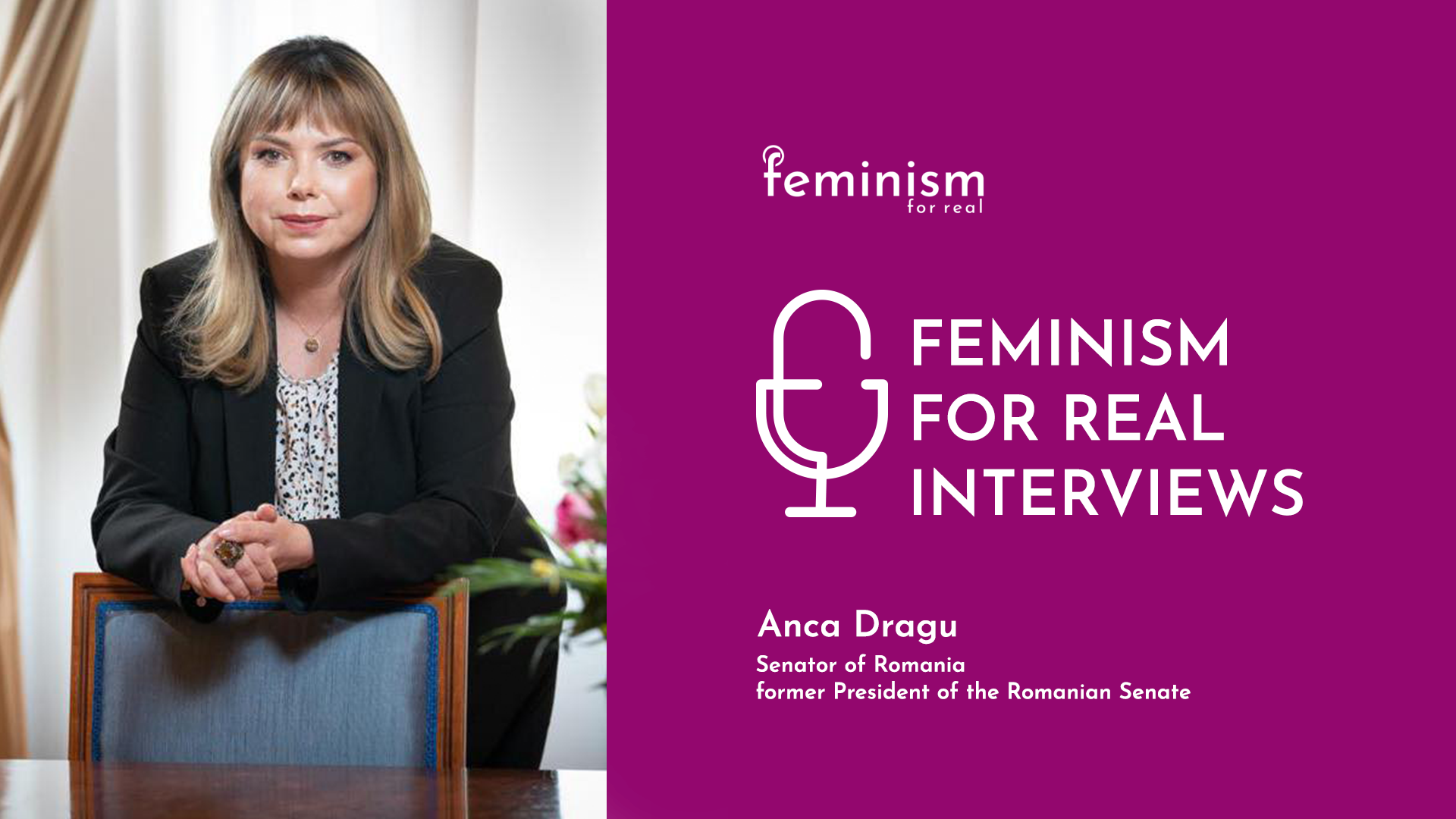 Anca Dragu is an economist by profession, she graduated Faculty of Finance, Insurance, Banking and Stock Exchanges at the Academy of Economic Studies in Bucharest, in 1996. Then she began her career as an employee at the National Bank of Romania from 1996 until 2001. From 1999 -2000 she specialized in international economics at George Washington University, in a postgraduate program on economic policy and international affairs, then a master’s degree in Public Policy and European Integration from SNSPA.
She is a Ph.D. in Economics at the Academy of Economic Studies Bucharest (2010) with a doctoral thesis on “Mechanisms for ensuring financial stability at the international level.”

In parallel with this long-life learning process, after the position at the National Bank of Romania she worked for The International Monetary Fund between 2001 and 2013. Between 2013 and 2015, she worked as an economic analyst at the European Commission, a comfortable and well-paid position she will give up to accept the Minister of Public Finance position in the Dacian Cioloș Government.

She was the 156th  Romanian Minister of Public Finance, the second woman in Romania in this high position, after Ioana Petrescu. During this period (November 17, 2015 – January 4, 2017), the Romanian economy experienced a period of growth, and the Romanian Leu went through a period of deflation. During her tenure, several fiscal relaxation measures were implemented, simplifying the Tax Code, increasing transparency of public finances and digitalization of the taxes payment system.

In the 2020 parliamentary elections, she won a position in the Bucharest constituency, from the USR-PLUS Alliance. She was elected as a senator of Romania on December 21, 2020 and President of the Romanian Senate, being the first woman in Romania in this high position. She held this position from December 21, 2020 to November 23, 2021.

The mother of a 12-year-old boy, Anca Dragu admits that she returned to Romania with a strong desire to contribute to Romania’s healthy re-construction.
She is an example of meritocracy, increasingly rare in Romania: “you can’t fail in your career if you follow the right and correct steps.” How does she always manage to stay on the right path and what sacrifices do involve this right attitude towards life and work?

We talk about the values of female leadership, as Anca Dragu experienced in various areas of work she has experienced and how important is solidarity in politics and beyond. We know that women support themselves in the private area, but less in the public. EU has managed to preserve its place among the regions with the biggest gender parity, with many of its Member States earning high scores. The challenges in closing the gender gap are substantial, but it’s a cause we should all be fighting for.

She is living proof of promoting gender equality so I invited her to share examples of good practices from the European Union – seen and experienced. And also bad practices.

I invited her to talk about the evolution of public policies for female entrepreneurship in Romania and how did she experience feminism in her personal, professional and social life.

➡️ As I progressed in school or advanced to higher professional positions, women became fewer and fewer;

➡️ It is not okay for only 20% of IMF economists to be women. That’s why we see so little care for topics like children, education, senior care, maternity, health;

➡️ What makes me different from other politicians – I really have a career;

➡️ I can do a lot of things if I have political support;

➡️ I am lucky to spend some time with my mother, who is over 90;

➡️ Another opportunity cost: I really need to do stuff meaningful and change things for the better;

➡️ I don’t like the idea of the impossible, everything is possible;

➡️ You don’t have enough problems how many solutions I have;

➡️ The spirit of our family is we don’t give up!;

➡️ Feminism is about normality, not about women who are better than men;

➡️ Politics is not about getting drunk, it’s about knowledge and construction;

➡️ Why are there only 18% women in the Romanian Parliament, and we have only one woman in the Government? Simply – they don’t want to share the power;

➡️ Resilience is the essential quality for a woman who wants to enter politics;

➡️ I have zero tolerance for any gossip about a politician, no matter which party she belongs to;

➡️ The most important position I had, less time for my family;

➡️ I want to be a role model for other people through what I am doing;

➡️ I didn’t understand feminism until I grew up, I reached high professional positions and I saw that I was the only woman.

➡️ I encourage women to join politics and if not, be aware that they can do whatever they want.

You can find ou more on video podcast: https://youtu.be/O94l39FZ_SI

Facebook
WhatsApp
Email
Twitter
LinkedIn
PrevPreviousSpain has a Women’s Institute and a Ministry of Equality. And this is beneficial for society
NextAndreea Paul – Supporting Women’s Civic, Economic and Political PowerNext